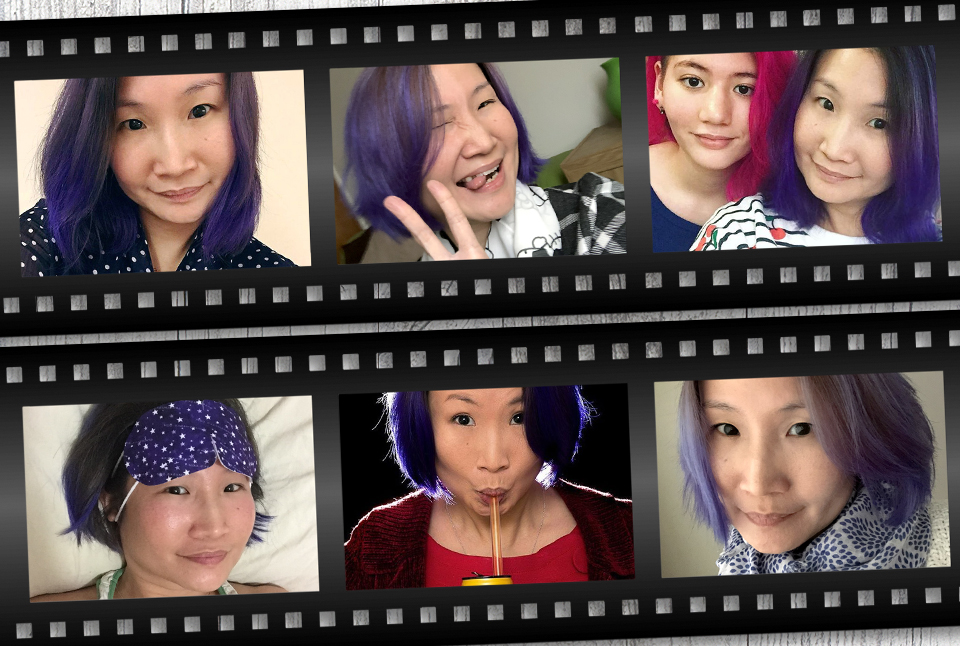 Hairy Adventure Part II – The purple is back! And it’s now even more purple than before! When I first dyed my hair (after more than half a decade of maintaining ultra-long virgin tresses), I had it done at a salon. If you’ve been following me, you may have noticed the smoky lilac result I shared last year. Unfortunately, the colour began to fade in less than a week, despite using colour-safe and sulphate-free shampoos.

Getting your hair professionally done can be pretty expensive, so I opted to brave the DIY option second time round (with a bit of help from hubby). I was nervous, but the outcome was…impressive! 👍🏻❤️

Six months on (and another haircut later), many have asked how I managed to keep the colour bright, and (almost) fade-free. It’s really very easy, but I think it does depend on the quality of products used as well.

First off, you’ll have to bleach your hair. How many times you have to do it is determined by the nature of your hair. I have friends who said they had to do it four or five times; one even said she had to do it seven times! This might not be necessary if you want an ombré effect.

My hair had already been bleached once by my hairdresser, so when I went over it again with the Renbow Crazy Colour Kit a few months later, I made sure to spread it out, starting from the ends, so there was less concentration towards the roots. I did not need to bleach it a third time. 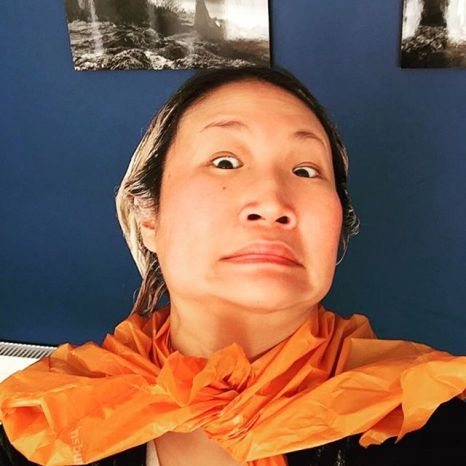 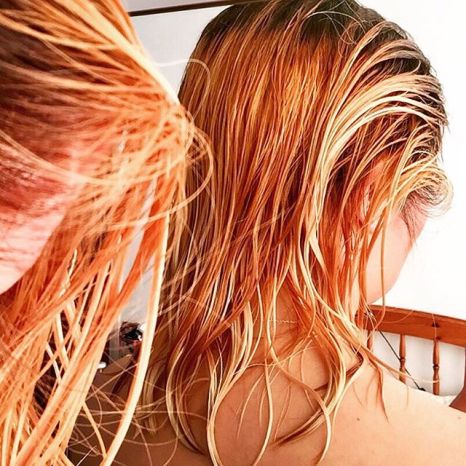 Much as I love ginger hair, it wasn’t exactly #HairGoals, so I initially panicked since that level of brassiness is beyond what a toner can fix. 😬😱

Turns out there was nowt to worry about! Ultraviolet contains a lot of darkish blue tones which neutralised the red in my bleached hair. Toner was not even necessary, and I have dispensed with that step since, though I still use silver shampoo and conditioner religiously…more on that later.

Not all hair colours are created equal, as I’ve discovered. If only I’d done my research! Semi-permanent pastels, such as the lilac I previously tried, have a reputation for being difficult to maintain as they wash out very quickly (sometimes within days). For those of us with dark hair, getting light colours to hold would require repetitive bleaching. I don’t know about you, but I doubt the straw bale look is attractive to many, apart from mice and birds maybe.

The violet from La Riché Directions lasted longer, but the staying power was still not particularly magnificent. My search continued, and it was at this time I noticed online reviews on Amazon for neon blue. A number of people were suggesting it’s so long-lasting that getting rid of this shade would require some effort, so I wondered…what if I combined neon blue with violet in a half-and-half mix? 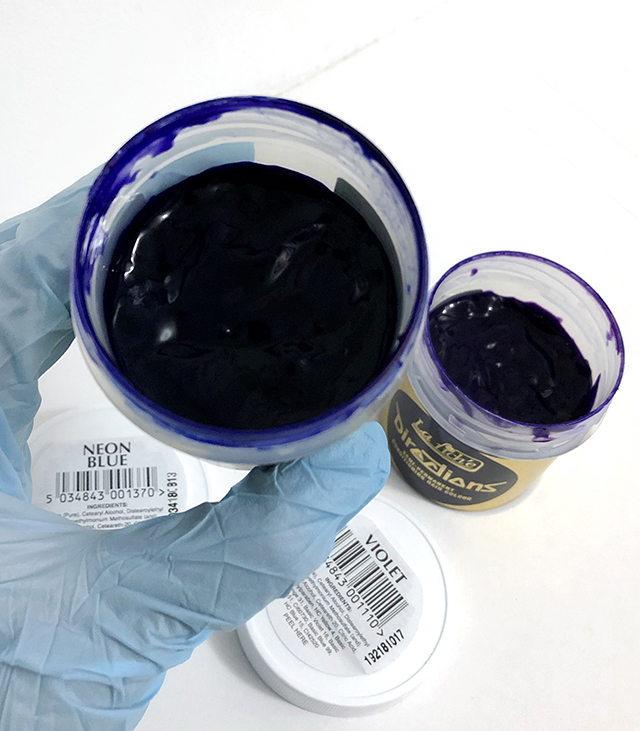 It worked beautifully! The ultraviolet was vibrant and blended in wonderfully with my dark roots. There were occasions when it looked like my head was literally glowing! Together with my daughter in this pic, we both look like we have #GalaxyHair! 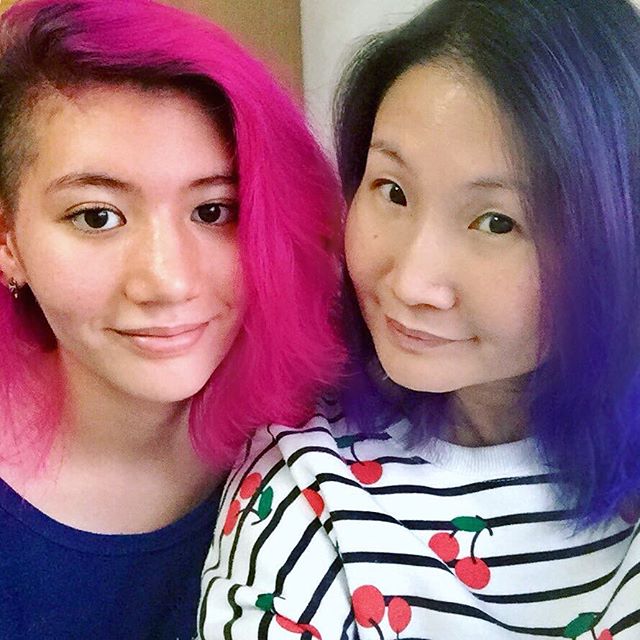 When this colour does begin to fade weeks later, the lighter bits go a sort of silvery periwinkle (or stormy blue, depending on the light), but there is a way to buy more time if that’s not the effect you want. 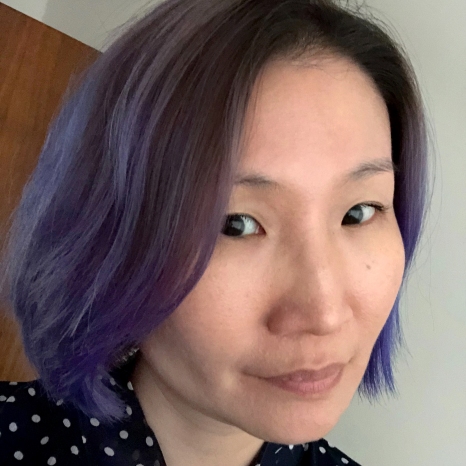 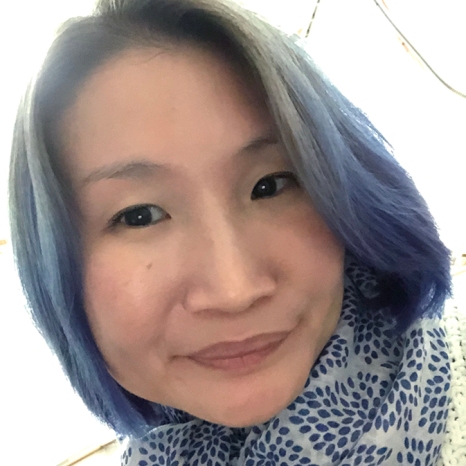 The trick is to add roughly half a tablespoon of dye to about 100ml of your conditioner, and after each time you shampoo your hair, leave it on for about 10 to 15 minutes whilst you shower. Decant into a smaller bottle* for the mixing process (but do not fill to the brim), and remember to shake well!

*Apologies, the photo below should show the larger bottle of conditioner, not shampoo! 😅 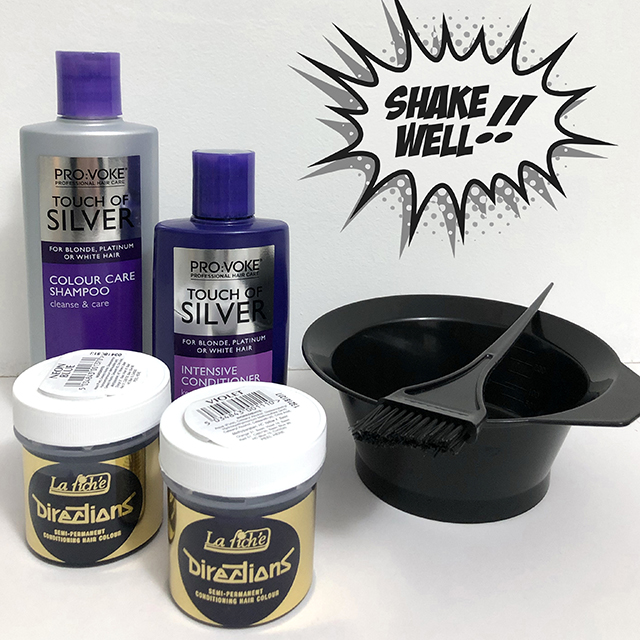 Would this stain your palms? Not especially. Skin is constantly shedding cells, so if the colour’s not gone by the time I’m out of the bathroom, whatever’s left would soon disappear when I next wash my hands. You can always speed up the process with some nail polish remover, though I’ve never needed to do that.

What I love about La Riché dyes (apart from the price, and no animal-testing policy) is how well it protects your hair. Their products contain no ammonia, peroxide, or PPD, which means frequent application will not cause damage. It’s good practice to also combine the above method with other beneficial products in the haircare spectrum. 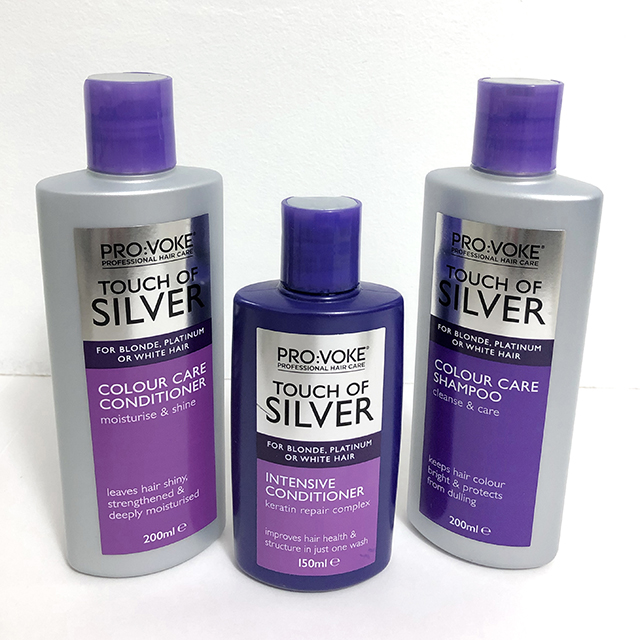 If you’re on a tight budget, I highly recommend the PRO:VOKE silver range. Plus, coconut oil as an overnight treatment at least once a month, or even better, fortnightly.

For those who are new to this, it’s probably best to take your first baby steps with someone who is fully-qualified, but once you’ve got to know your hair, it is actually possible to get the same results (or in my case, improve on it) for a fraction of the price.

Update 11/10/19 – Quite a number of people have asked how long the purple lasts on my hair, so I have shared a video to demonstrate the effectiveness of the maintenance process over time.

Hopefully, it will give you an idea of what to expect if you decide to join the violet brigade. Anyway, if all goes wrong, there’s your excuse to start a new hat collection…consider it a fringe benefit! 🤦🏻‍♀️🤣