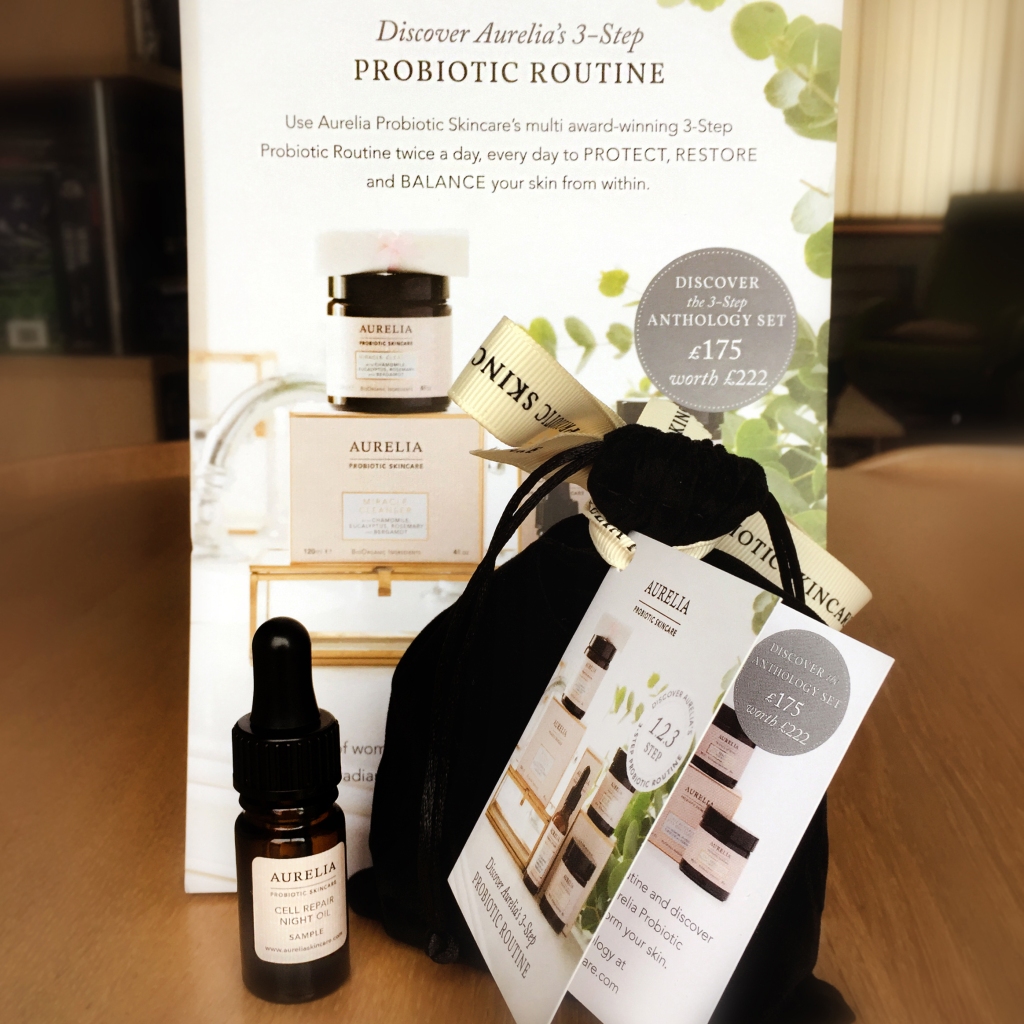 At this point, you’re probably wondering: “What?! Who on earth wants that?”…Then again, I’m sure you’ve probably also heard of good bacteria, like in yoghurt, drinks, and other types of food. Well, it seems that the beauty industry isn’t immune to the benefits of these microbes either, because…enter PROBIOTIC SKINCARE!

Following on from my previous post regarding subscription boxes and freebie campaigns, I began to notice a change in my social media feeds, facebook in particular. Loads of ads like those below began to appear… 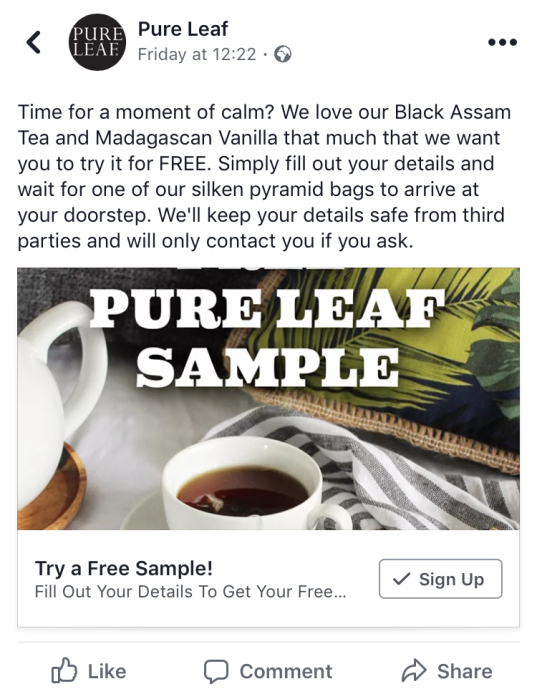 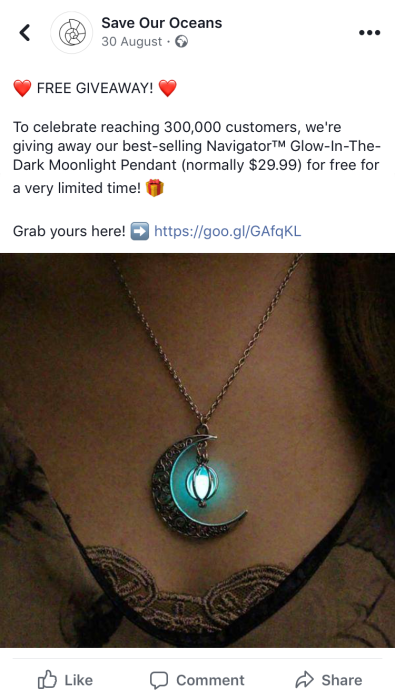 I guess my interest in giveaways must have been noted by its algorithm, especially after I clicked through to order free samples from Angela Langford. (No, no, these aren’t the ones with the helpful bacteria. I’m just going off on a tangent!) 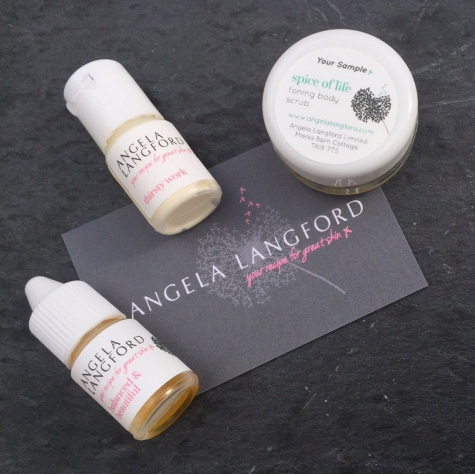 Although I didn’t think what was sent to me made any immediate difference to my skin, I have to say the service from Angela Langford was very well personalised. As a result of a questionnaire I filled in when placing the order, a letter came with the specially selected skincare kit along with advice specific to my conditions. Sadly, as the samples were not very generous, I was unable to make any sort of judgement. However, don’t be put off trying it out as everybody’s skin is different. Plus, it doesn’t cost much more than the small postage fee.

I fared a little better with Aurelia’s 3-Step Probiotic Kit. As mentioned earlier, I’d recently been getting more than my fair share of facebook posts about free stuff. One of the latest was a call-out from Aurelia for Brand Ambassadors. After signing up, you’d be sent the Starter Set (worth £45) for free, and apart from the £3 delivery, the only thing you’ll have to do in return is review the items they send you. As an added bonus, you also become part of their VIP panel which entitles you to perks like discounts and more samples.

Well, the OCD side of me was initially a little apprehensive about slathering bacteria all over my face, but we’ve all read about how good these little ‘creepy crawlies’ can be for our internal organs, and what is the skin but another large organ. Besides…it’s free! 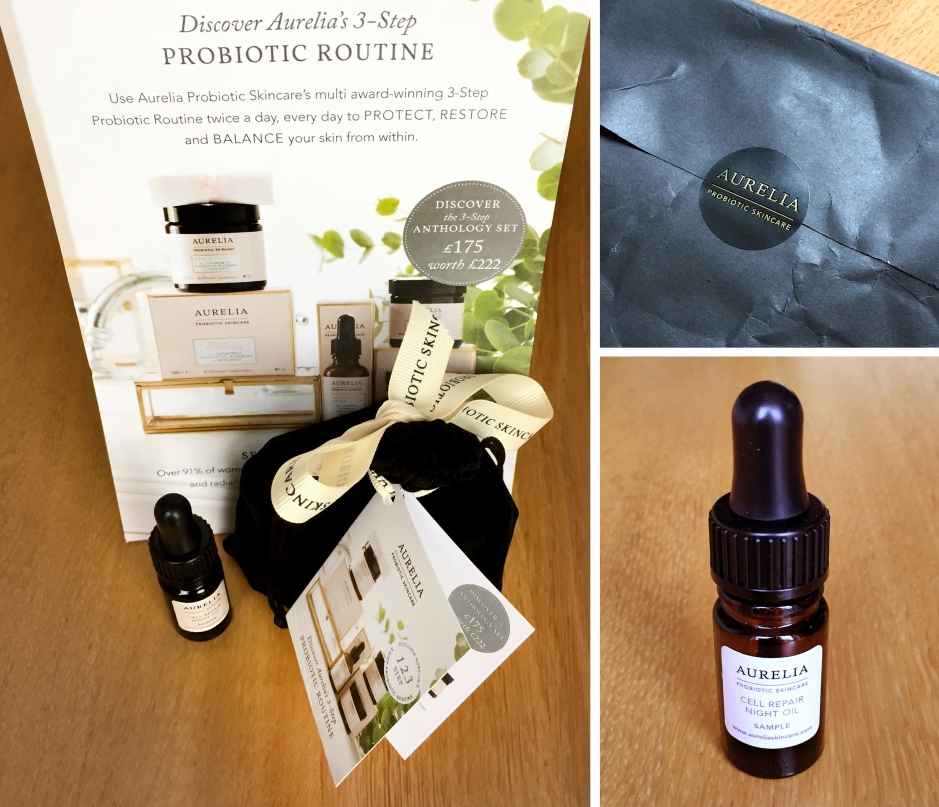 I received the starter set a couple of weeks ago, along with an extra free sample, and finally got a chance to try them out. I have to admit, I’m a sucker for nice packaging, so if I had to rate Aurelia on that alone, I’d rank them pretty high up…maybe not right at the top, as I’m not a huge fan of jars (for hygiene reasons) even if they do look aesthetically pleasing. That’s not going to tell you if you’ll get your money’s worth though! 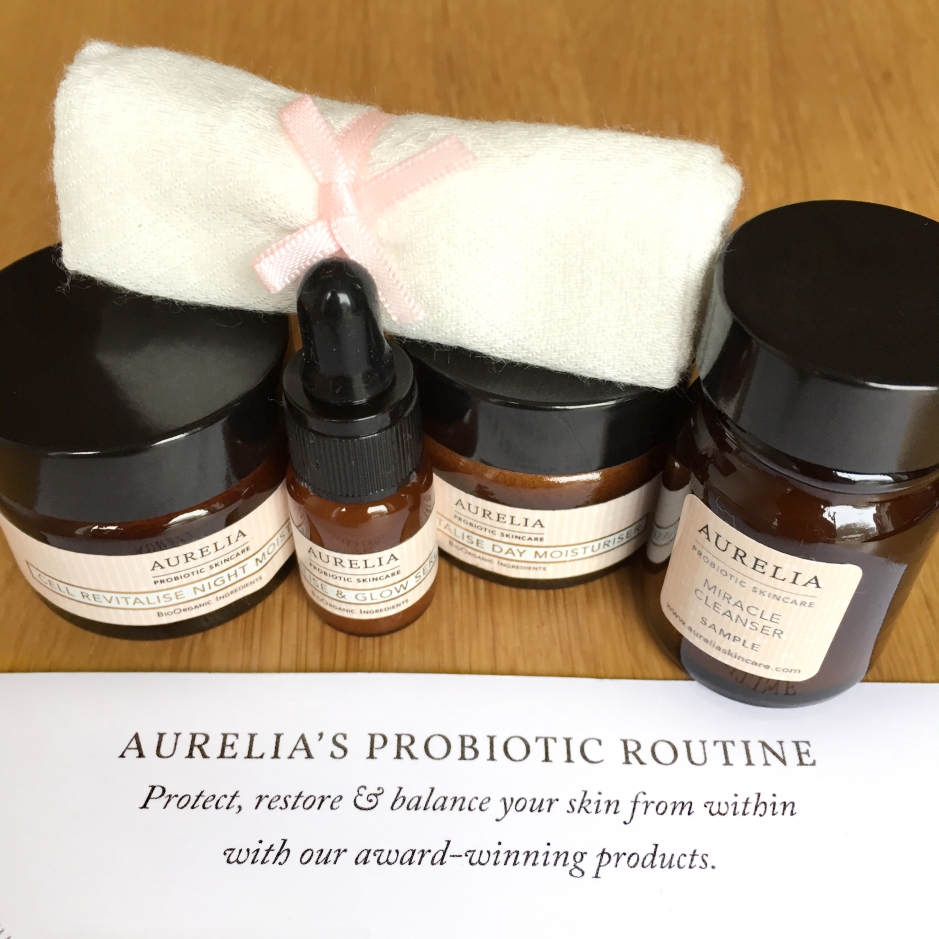 If you need instructions and a list of ingredients, all of that can be found at Aurelia’s website, but here’s a card they provided to explain how each step in the routine is meant to bring out the best in your skin. 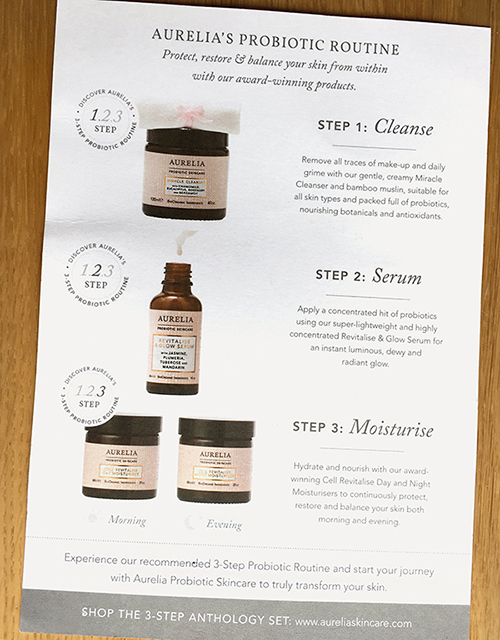 As I prefer to wash my face in the shower, I find it more convenient to use a cleanser that can be rinsed off with water. Anything wipe-off is normally a deal-breaker. That said, my night-time regime is a little more flexible, so I was willing to compromise a little, just to see if Aurelia’s oft-touted award-winner could make a difference. 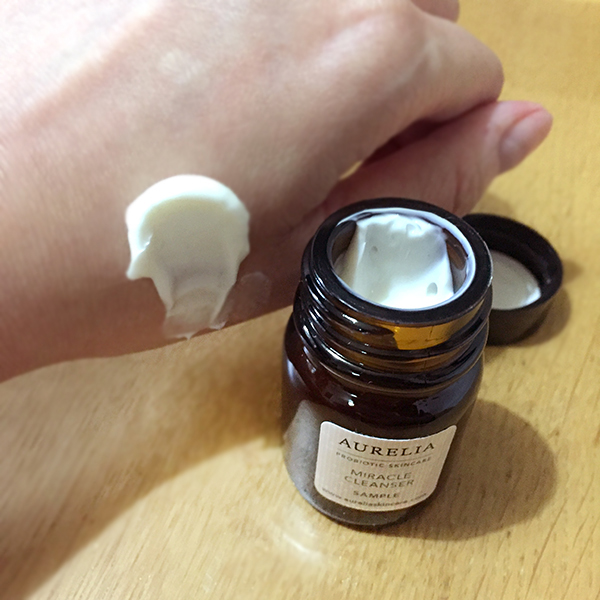 The Miracle Cleanser is perfect for anyone with dry or sensitive skin as it’s thick and creamy, and it came off easily using a damp Antibacterial Bamboo Muslin. As Aurelia only supplied one, I used my own flannel the next morning and can’t say I noticed any variation between the two. My skin did feel thoroughly cleansed without the tight feeling you can sometimes get. Having said that, it’s not a problem I have with my usual facewash either. I won’t say anything miraculous happened, but my skin did feel a bit softer after using Aurelia’s cleanser.

Next in line is a serum that purports to “transform dull, polluted and fatigued skin, for an instant luminous, dewy and radiant glow”. 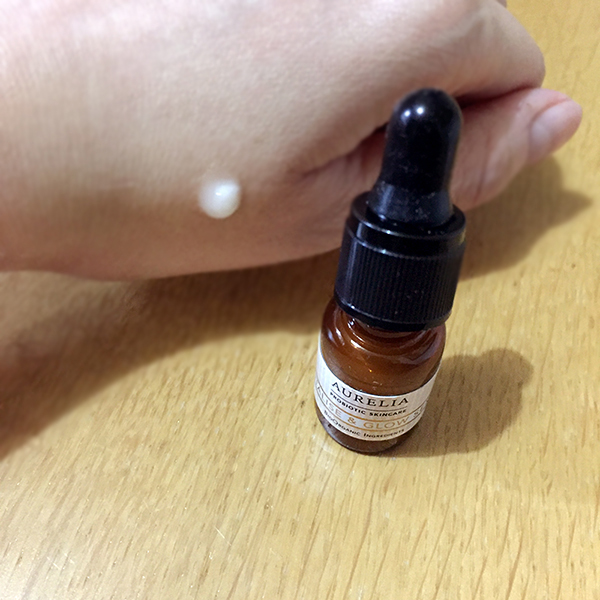 It was actually as lightweight as advertised, and very easy to apply. You don’t need much of it so a little will go a long way. I should say that at this stage, everything is smelling utterly divine. It’s a really fresh natural scent, almost medicinal, but in a citrusy-herby kind of way. This serum absorbed rather quickly so I was soon ready for the next step.

This isn’t part of Aurelia’s main Anthology Set but you can add another free sample to your order, and I chose the Night Oil. According to the website, this has to be layered “over Aurelia Revitalise & Glow Serum” but “underneath Aurelia Cell Revitalise Night Moisturiser “. 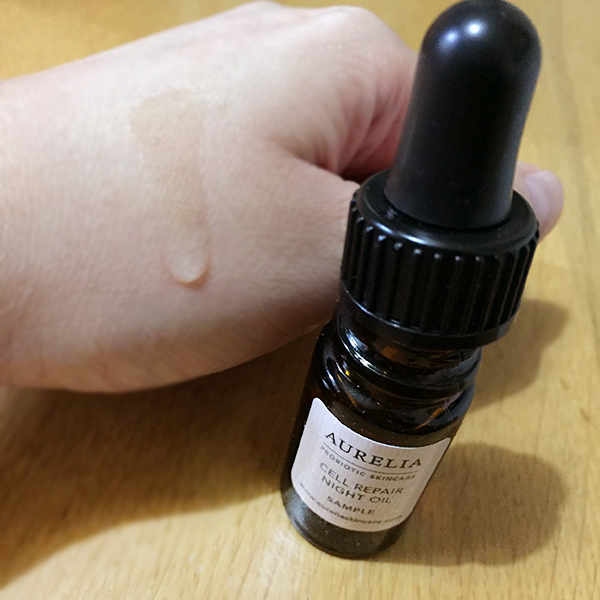 As you can see, the oil is pretty runny. I think I may have used a bit too much as my face became rather shiny after applying this. That isn’t a major concern as I’m not bothered about what I look like when I’m in bed and the lights are off! The only thing I care about is whether everything I’ve subjected my face to is worth the effort and expense. The latter isn’t an issue in this case, but Aurelia’s prices are not exactly High Street friendly.

And now we come to the final act of my bedtime beauty tableau. Amongst other virtues, the Night Moisturiser also claims it can help “wind down and prepare for a restful night’s sleep”. I was pretty tired anyway, so I didn’t need much assistance to nod off, but I could detect a hint of lavender in the fragrance, and that is known for its soporific quality. 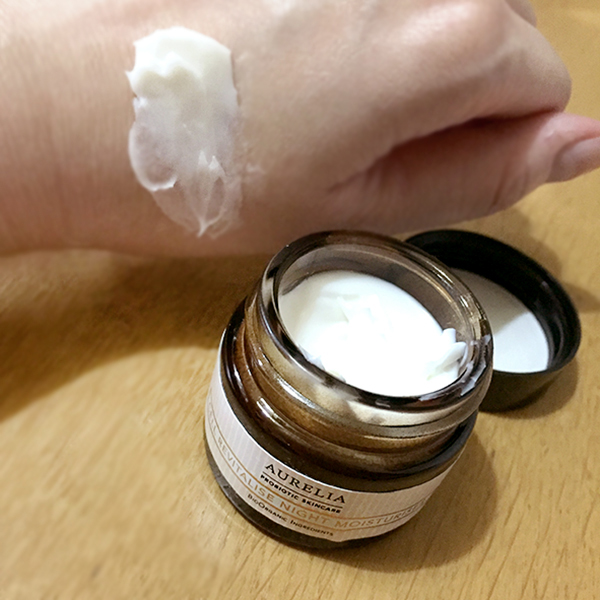 This cream is very rich as per Aurelia’s description, and that definitely contributed to my facial wattage. If my husband were still awake at this time, I’m certain he could read by the light of my countenance.

I diligently went through the same process again the next morning, but with the Day Moisturiser instead. Although it is supposed to have a “matte-finish”, I’m afraid it didn’t have that effect on me. In fact, you can see that the cream looks just as rich as the one for night-time. 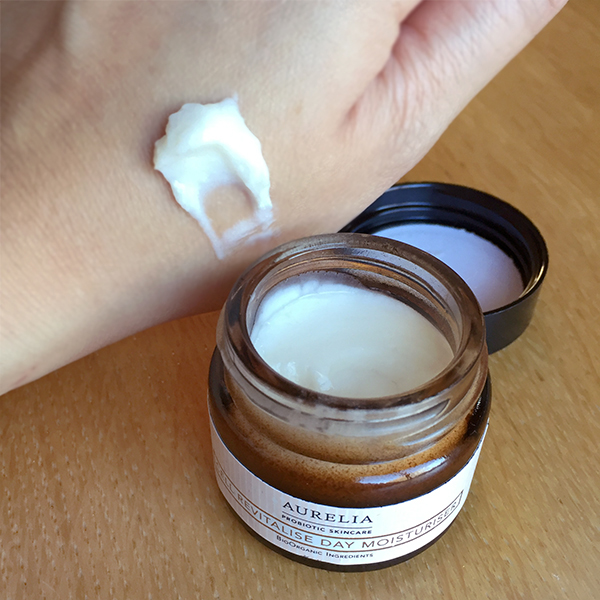 It could be a combination of all the products (obviously minus the Night Oil), but if you want something that controls shine whilst out and about, this moisturiser really isn’t for you. That said, my face didn’t feel like it had as much of an oil slick on it as the night before. Furthermore, it did seem to radiate less after I’d given the cream some time to sink into my skin.

Just to demonstrate, here are a couple of photos I took sans makeup – the first one almost immediately after application (with slightly damp hair!), and the next about an hour later. 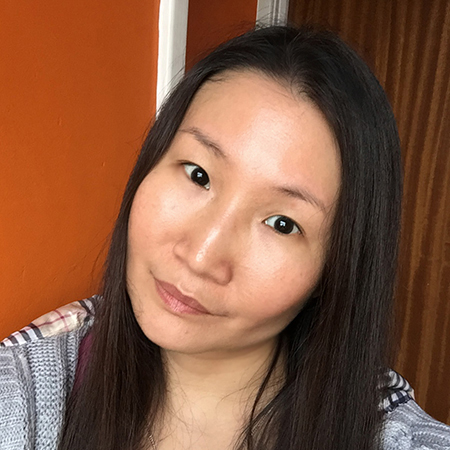 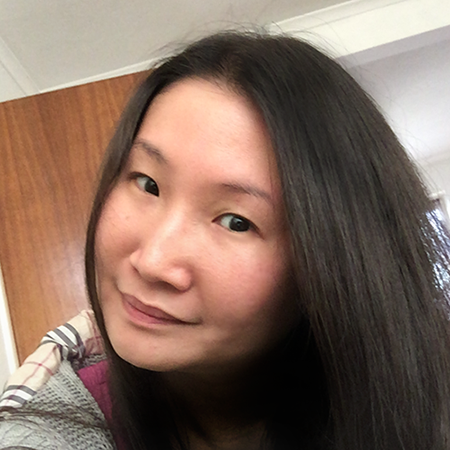 I am not able to comment on the long-term effects of Aurelia’s Probiotic Kit as I’ve only just started using it, and some of the samples will most likely run out in a couple of weeks. Although the products are suitable for all skin types, I’m not entirely sure as to how friendly bacteria would alleviate common problems like age spots, large pores, scars etc. As Aurelia’s signature ingredients are formulated to “calm the natural immune triggers in your skin which can be overstimulated by pollution and stress”, there is a possibility their 3-Step Routine will eventually lessen the impact of rosacea, acne, and even smooth out the effects of ageing.

My combination skin was going through a flaky patch, and from past experience, I knew it would take quite a number of days (sometimes more than a week) to balance itself out. However, this Starter Set managed to fix that within 24 hours. That’s actually a great result, so I highly recommend this if your skin frequently suffers from dehydration.

I must admit my skin did look healthy and nourished after its probiotic exposure, so it stands to reason that regular use of Aurelia’s probiotic line would only improve it further. My main point of contention is the cost of it all. There is no doubt that these are luxury products, so if money were no object, go ahead and take a punt on this.

I can no longer find the relevant facebook post for Aurelia Brand Ambassadors, so perhaps there was a cutoff date. However, a search online led me to a competition for Discovery Kits. Hopefully you’ll be one of the lucky 500, and get to put probiotic skincare to the test before spending a mini fortune.

Personally, I have come across natural skincare that can do almost as good a job without taking a huge chunk out of my wages. Aurelia might out-perform cheaper brands (and some homemade concoctions) slightly, but until I have an income that can match my growing wishlist, the hunt for something better-yet-affordable must go on. 😎