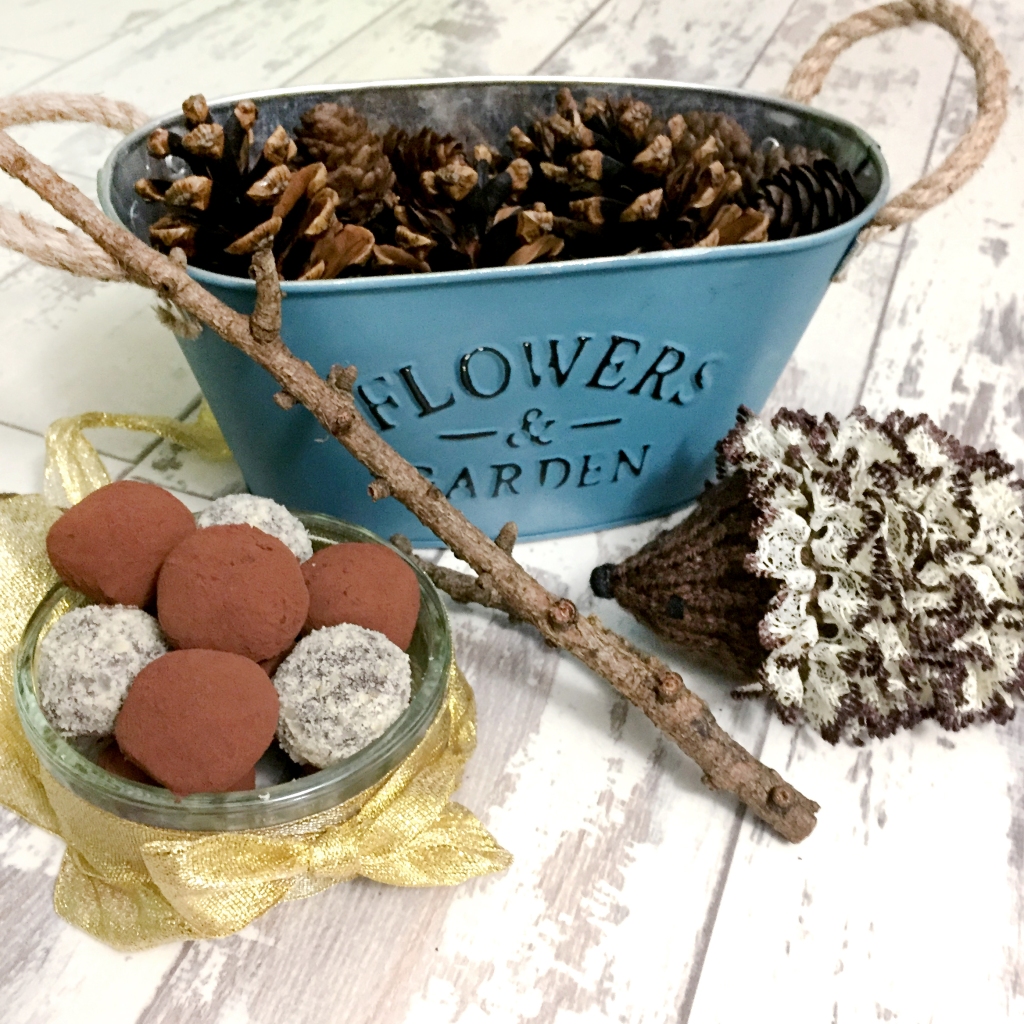 Looking for the truffle recipe?

Scroll down to the second half of this post. 😊👌

Everytime someone whinges “but it’s not even December”, an elf loses their sense of purpose, and gets turned out into the cold. Help save jobs in Santa’s Workshop by keeping the festive spirit alive! Forget S.P.E.W…that’s so 1994. Elves of today have a new campaign and slogan – Christmas should be forever, not just once a year. 😀

Yes, I know…I’ve gone a bit OTT, but people can bah-humbug me all they like. I’m still not going to change; I just love Christmas. I was making plans for this occasion even before Halloween had been and gone…Actually, I probably started as early as spring when I went looking for pine cones during our nature rambles. 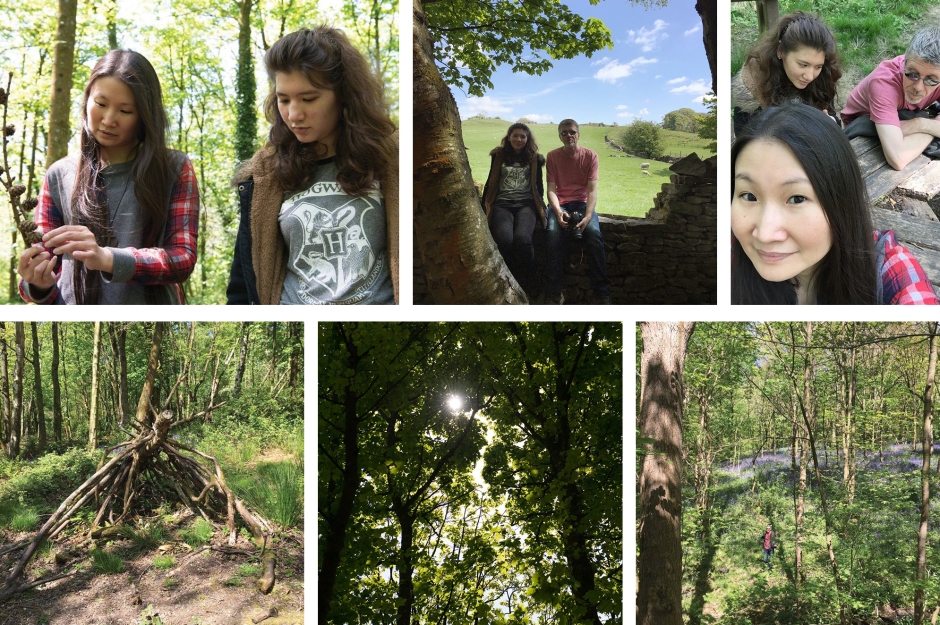 Early May saw us at Spring Wood in Walley which was practically covered in gorgeous bluebells. Quite by coincidence, it also had a lot of pine trees in the vicinity…The ground was full of pine cones, much to my delight. If you live in Lancashire, another great place to gather pine cones would of course be Beacon Fell. 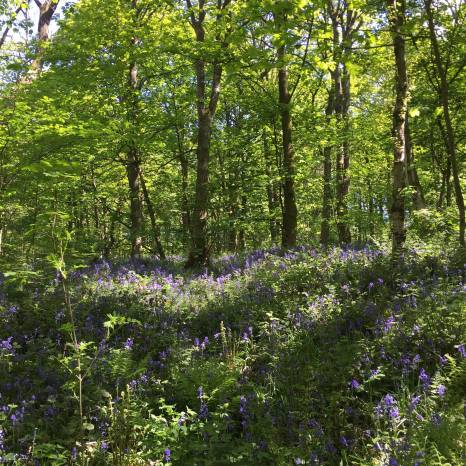 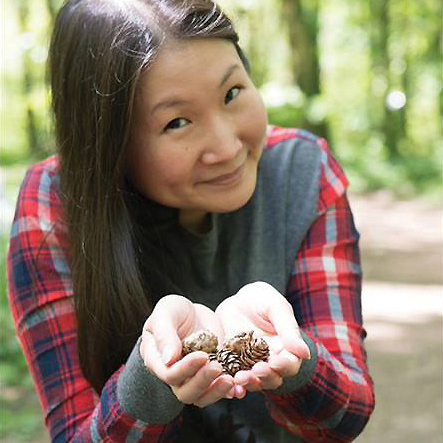 I wish I’d thought of bringing a bag or basket with me because I could only carry the cones in my coat pockets. They were very large and deep pockets though, so I did collect enough pine cones for craft purposes. The little branch that some of them were attached to could come in useful for another project, so I took that home with me as well. 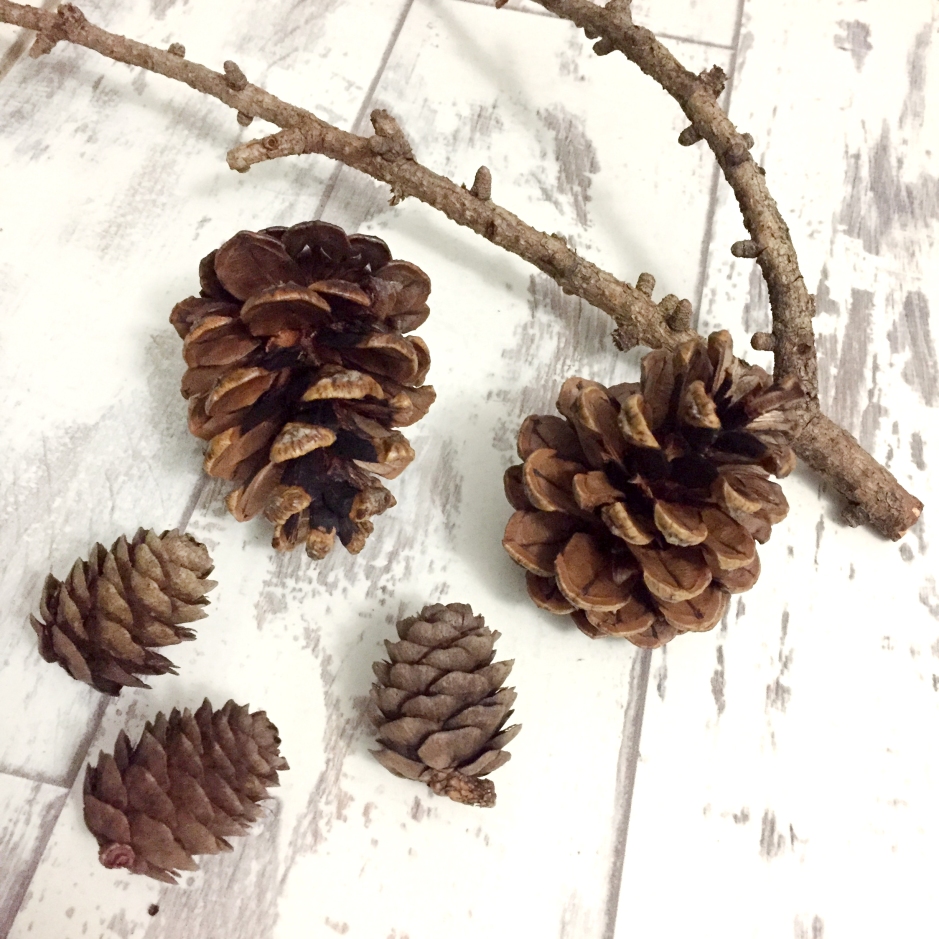 As it’s my first time working with pine cones, I had to do some research on how to prep them. According to various online sources, there are a number of methods. However, a vinegar bath seems to be the popular choice. Mostly because it not only cleans them, but also kills any bugs that may be hiding within. It will stink the room out as well, but that can’t be helped! 😛 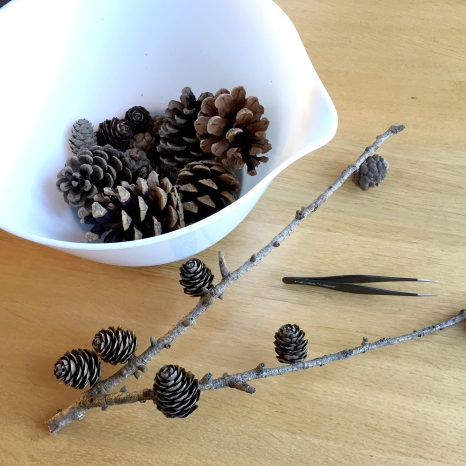 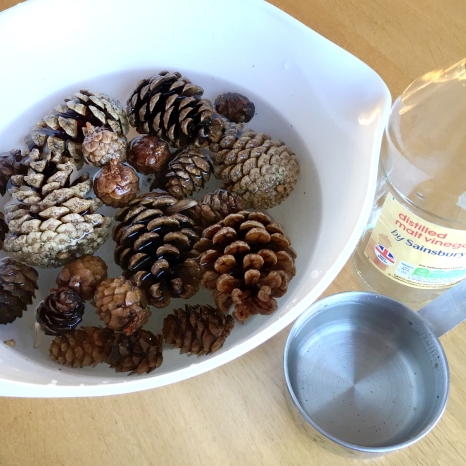 It’s advisable to grab a pair of tweezers so you can remove any visible debris before doing anything else. There’s probably all sorts of muckiness trapped in the scales. After that, put the pine cones in a bucket or large bowl. Mixing the solution is not an exact science, but it’s roughly two parts water and one part white vinegar.

Leave the cones to soak for about 20 minutes or so. You might want to weigh them down with a small dish as they tend to float to the top, and the cones need to be completely submerged in order to be cleansed thoroughly. 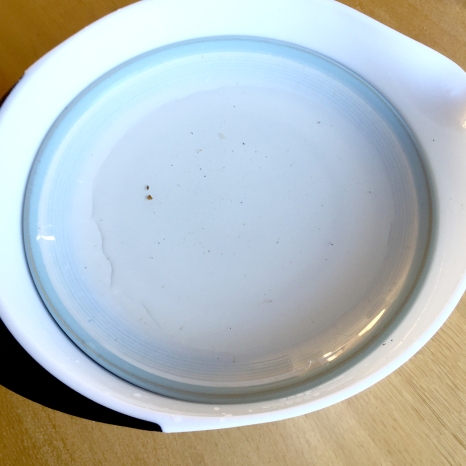 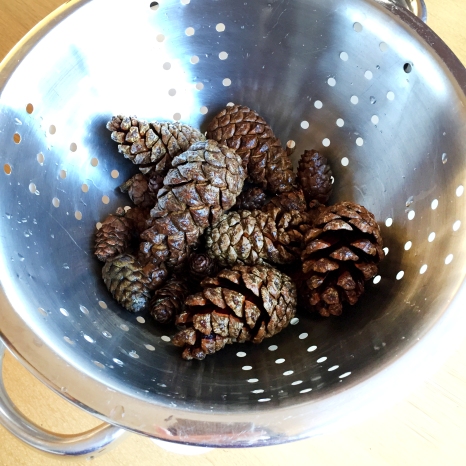 As you can see, the pine cones close up when wet, but this is normal, so no need to panic. They open up again once dry. From here onwards, there are two ways you can proceed. Either lay them out on some old newspapers or a towel, and let them dry naturally, or use your oven. 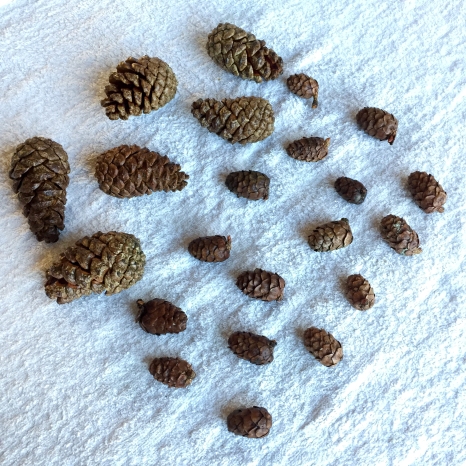 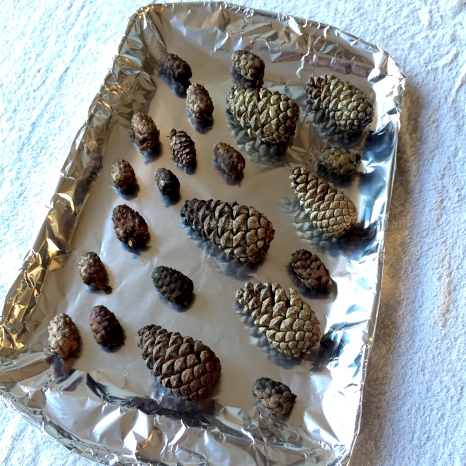 I am not certain if there’s a difference in the outcome if you opt to do it either way, but I have heard that airing cones can take a few days, whereas the oven gives a much quicker result. Plus, it has the added benefit of further bug-proofing your cones.

As I was impatient, I put them in the oven on the highest setting and took them out after about 45 minutes. It was probably a little too long as a few of the cones turned darker. I didn’t mind so much as some of them will get painted eventually, but for future reference, I’ll take the cones out after half an hour, or turn the heat down. 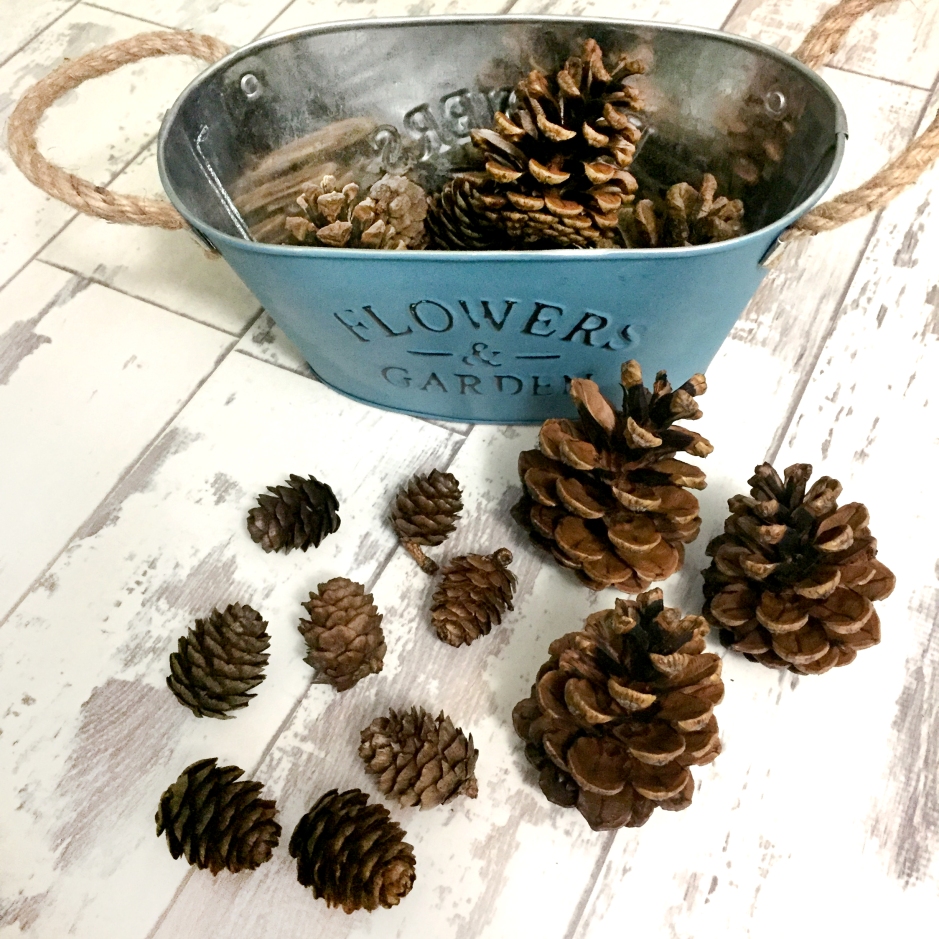 When the pine cones are dry, it is recommended that you coat them with some sort of clear varnish in order to preserve them. The smaller cones were quite brittle, so the lacquer did help slightly in keeping the ends from flaking off. I am not keen on gloss, so it was a matt spray that I used. You can’t really tell from the photo above, but the pine cones that I sprayed have a smooth sheen as compared to the ones in the tin trough which have no varnish on them, since I will be painting those at a later date when making some of my Christmas ornaments. 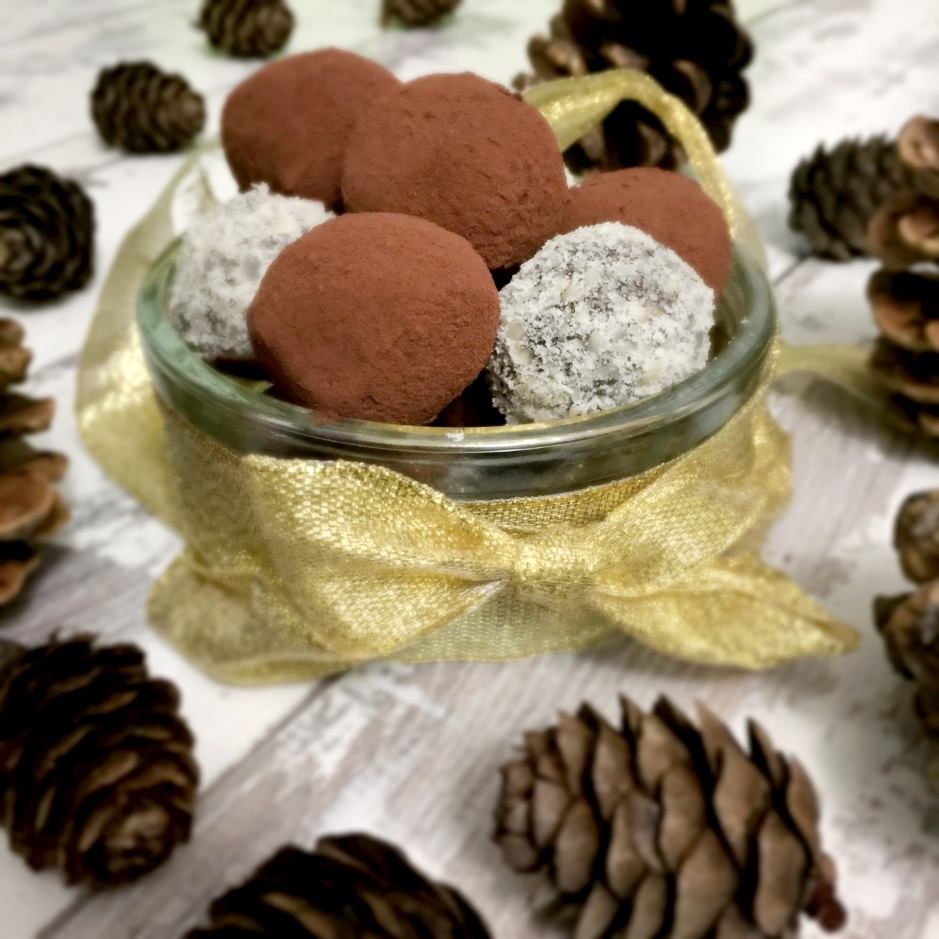 Pine cones fully sanitised and glazed, I could finally relax and enjoy a small batch of truffles I made earlier. What could be more Christmassy than chocolate? Truffles are a simple treat to make, whether for yourself, or friends and family.

The recipe is pretty forgiving as not a lot can go wrong…It’s basically ganache that has been allowed to set, rolled into little balls, and coated in ground nuts, cocoa, or any other ingredients you like. To make these, I used:

Melt the butter in the cream until the mixture begins to simmer. Then pour it into a bowl with the chopped chocolate. Keep stirring until the chocolate melts and blends smoothly with the cream. If you want to add other flavours, such as coffee or Amaretto, now would be the time to do so. 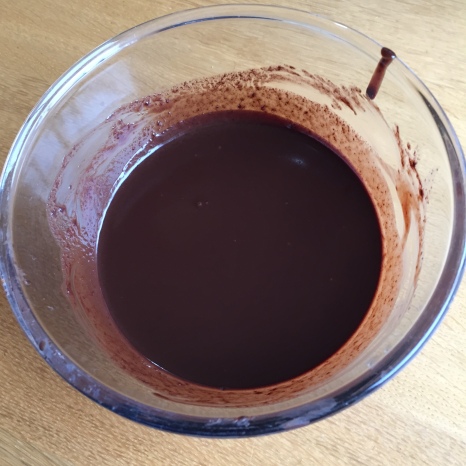 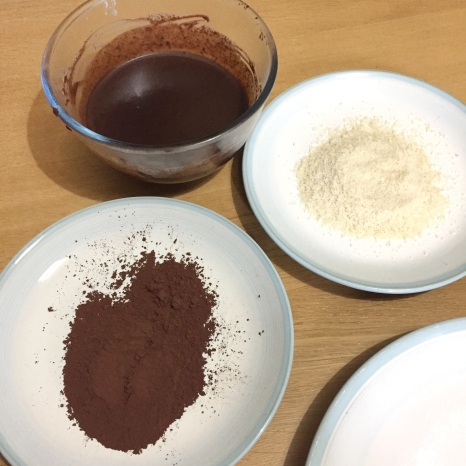 Let it the ganache set in the fridge for a few hours (it took four hours in my fridge). You’ll know it’s ready when the little balls keep their shape after you’ve rolled them in your hands. The first one I made sank into a sort of squishy blob, so back into the fridge the ganache went.

I used unsweetened cocoa and ground almonds to finish off my truffles, but you could also try dipping them in milk chocolate or desiccated coconut. After coating them, I left my truffles to chill in the fridge overnight so they could solidify further. I am not sure what the shelf life would be for homemade truffles, but that might not be much of a concern…If your family is anything like mine, it won’t be 24 hours before they’re all gone. 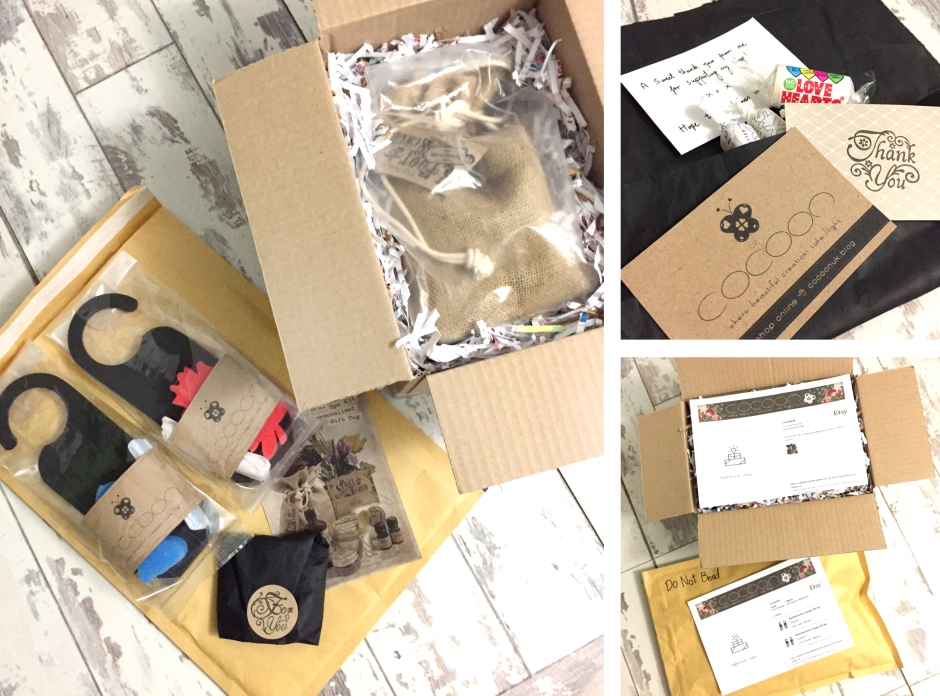 I’m very happy to say that the test/launch of my Etsy shop is going well, and I have made quite a few sales since opening it a couple of weeks ago. As a gesture of appreciation, all customers will receive complimentary gifts of either sweets or scented tealights, along with a small discount for their next purchase. Thank you all for your support…It’s been awesome! 🙂