So…you may recall a previous post (the one with the kaya recipe) in which I mentioned I had an abundance of pandan leaves to use up? Well, here’s me going through the rest of those fragrant fronds in a couple of culinary experiments that (fortunately) turned out according to plan. 😀

As promised, I made us Ji Bao Gai 纸包鸡 (literal translation: paper-wrapped chicken), a Cantonese dish that I haven’t had since childhood; and Sago Melaka (aka Sago Pudding), a very simple Peranakan dessert which you can see in the above pic. It goes without saying that both recipes include pandan leaves (or shop-bought pandan essence, which is easier to store and has a longer shelf life) in the list of ingredients.

Pudding – Add sago pearls* to boiling water. A serving of a similar size to what you can see in the photo above would require about three to four tablespoons of pearls. You’ll know they’re done once the grains turn translucent. Don’t worry too much if a few still have a bit of white in them so long as they are soft.

Drain the pearls in a sieve, and give them a rinse under the cold tap to get rid of any starchiness. After that, gently press them into jelly moulds or small bowls before placing in the fridge to chill for a couple of hours. Alternatively, if you’re not fussy about how it looks, set the pudding in a large tray or dish, and scoop out portions when ready to serve.

*Be careful not to confuse sago pearls with the huge dark tapioca globules in bubble tea. They are not the same thing! For this recipe, you’ll need the little tiny white balls, like in the left-hand pic below. 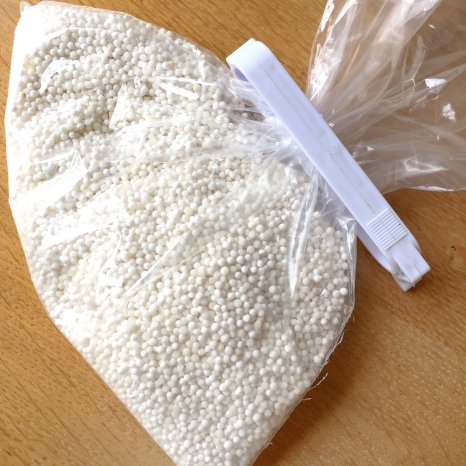 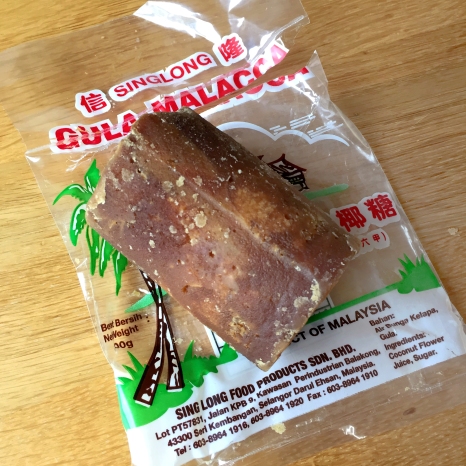 Syrup – Heat up some gula melaka** in a pot of water with two or three ‘knots’ of pandan leaves. You’ll need roughly one tablespoon of water per 30g of the gula. I used about 100g for this batch of pudding (for four people), and still had quite a bit of syrup left over. Stir until the mixture caramelises, then set aside to cool. It may thicken further if you refrigerate it. Should this happen, stir in a few drops of hot water…just enough to thin it out, but not so much that the syrup re-heats.

**There are a few different types of palm sugar, some sourced from the date palm, others from coconut or nipa. Gula melaka originates from the Straits of Malacca (hence the name), and is produced using the sap of flower buds from coconut palm trees. Like pandan leaves, you can get them from most Asian stores, or major online shopping portals like eBay or Amazon. They come in hard solid blocks which can be difficult to break apart. However, they do grate easily.

Cream – Bring coconut milk*** to boil, and stir in a pinch of salt. The cream isn’t actually supposed to be savoury, so don’t overdo it. The idea is to enhance the milk’s natural flavour while acting as a counterpoint to the syrup. It’s probably best to sprinkle in a few granules and do a taste test before adding more (if required). Leave the cream to cool before serving.

***Any brand coconut milk will do, and most supermarkets sell them. I like my pudding to be literally swimming in cream, so a 400ml tin was about right for us, but smaller 250ml cartons are also available. Leftovers can be refrigerated for later use, though not beyond a week. 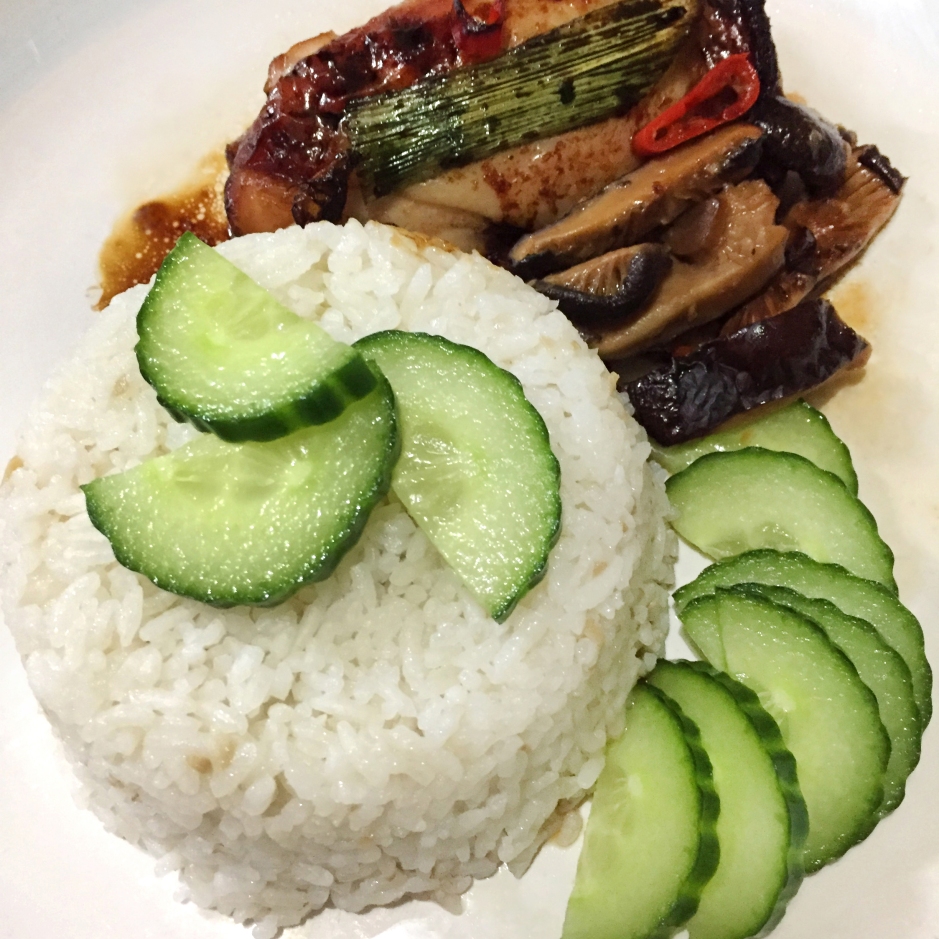 This dish is traditionally deep-fried, but I was overjoyed to discover that the healthier option of oven-baking is entirely doable! Yay, no more greasy kitchen…It’s such a bugger to clean!

Breast fillets are fine if you are calorie-conscious, but I personally prefer chicken on the bone (with skin…it’s the best bit!) as they’re tastier and juicer, so what you see here are chicken thighs (halved). 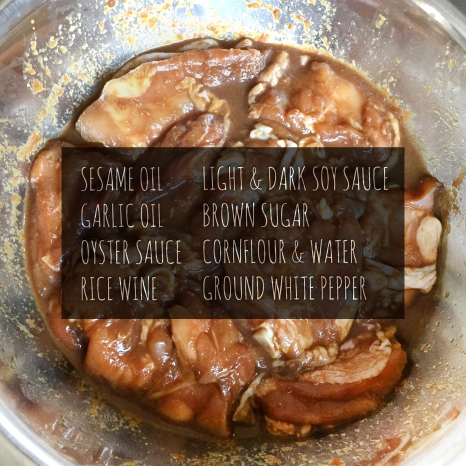 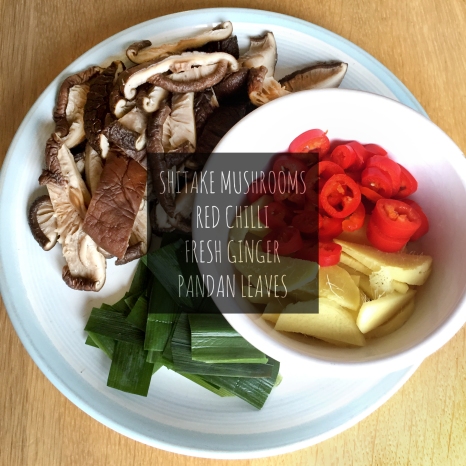 Marinade – The essential ingredients are oyster sauce*, rice wine**, and the cornflour solution (so you don’t end up with a watery dribbly mess when unwrapping the chicken). Minced garlic would be ideal, but I was lazy and had recently bought a huge bottle of garlic oil from a discount store.

*I am very picky when it comes to oyster sauce, and would rather go through the trouble of ordering good quality (yet low-cost) ones online than purchase what most UK supermarkets have on offer. Highly recommended brands are Lee Kum Kee Gluten-Free or Ayam – neither of which contain MSG, but I honestly can’t say I’ve noticed that the authentic flavour has been compromised.

**If you haven’t got any rice wine, it’s ok to substitute with white wine…my dad often uses brandy or cognac in place of wine whenever he does the cooking and everything still turns out just as scrummy, sometimes even more so! 😮

Parcels – The chillies are optional, and any mushrooms will do, though shiitake works best here, and it doesn’t matter if they’re fresh or dried. However, the latter will require pre-soaking in hot water. 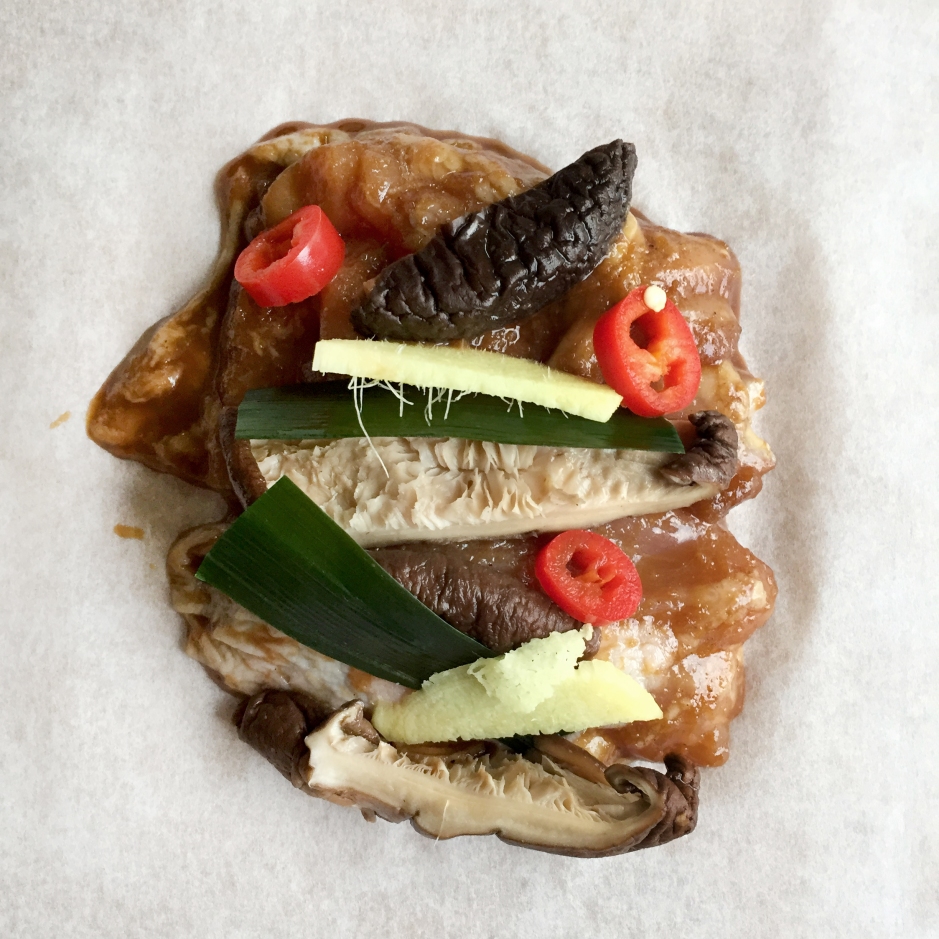 Wrap chicken pieces in parchment/baking paper, and secure the parcels with staples before baking. 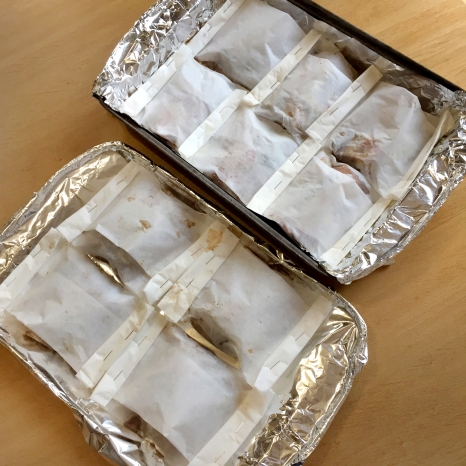 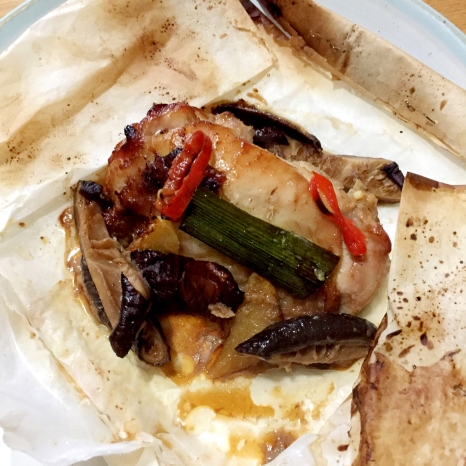 Not going to specify a time or temperature as all ovens are different, and you’ll probably know how to operate yours better than I would. If you’re not confident, my advice would be to leave a parcel unstapled at one end so you can keep checking if the meat’s thoroughly cooked.

As always, any meal that involves pandan leaves (or other Asian ingredients) fills the whole house with a wonderful aroma that stirs up lots of memories from my growing-up years…mainly family celebrations – three generations of us sat around a huge table chatting, laughing, enjoying great food, and even better company. Happy days! 🙂

I suppose olfactory trips of of nostalgia are pretty much universal, but each experience is unique, so it’ll be interesting to hear what stories others have to tell. Comment below if any food smells in particular whisk you off to another time and place…what magic does it work on you? ❤